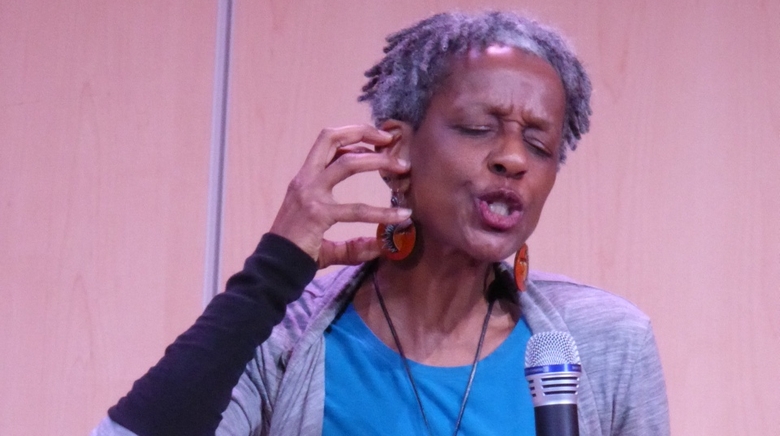 Some call me Storyteller

I am that and so much more. I mean, doesn’t it come to that in the end …that we are indeed the product of and the creators of our stories?

Once upon a time…

While going through some old papers one day, I came across a couple of newspaper articles featuring me as a high schooler, participating in the Black Student Union and talking about racial discrimination in school. It was during that time in the late 60’s, that I performed a monologue from a play about a young black student in the deep south, attending her first day of integrating the white school where armed National Guards protected her from mobs of enraged, violent white protesters.

When I was a kid growing up in New Jersey, I would hear hushed pieces of conversations the adults shared with each other, about racial violence and the many acts of discrimination they experienced. I would witness and become familiar with the various ways black and brown people were treated inferior by white people who knowingly or unknowingly, kept limits on what we had access to in this society. In the black newspapers and magazines,

It’s a peculiar life skill growing up vigilant of the white people around you. For the grace of God and the protective guidance of my parents and others around me, I was not personally subjected to racial violence. My run-ins with Race had more of a broad-brush stroke that still colors my days with the vast evidence of life in a racially bound society.

I didn’t set out to talk about race, much less to perform about it. But I did want to see us heal from it. Performance art has always been a creative way for me and Race, well… it was just there… like air.

There is an unspeakable aspect to Race in our country, a properly reined, politely avoided, fear tinged embodiment of story that isn’t “supposed” to exist yet remains an undeniable and persistent haunting entity in our lives every day.

Performing arts have been a part of my life for as long as I can remember and probably even before that. I was the kid who gathered the neighborhood kiddos to stage a backyard show while I just so happened to also direct the show and make the costumes. You could always find me performing on stage at church, school and community events. I loved everything about the creation of performance and participated in performing onstage as well as many behind the scenes technical and administrative roles.

Skilled at crafting with my hands I ended up becoming a professional costumer in the entertainment industry for some 30 or so years, creating and handling costumes from custom made to special costume crafts and millinery. I worked with leading repertory theaters, Hollywood film studios, opera, TV and with local and nationally acclaimed theaters and on & off Broadway shows. Interspersed within that time, there was a good share of dancing and acting that kept me on stage as well.

I lived in a world of creation, of a thought turning into an idea and that idea turning into a collaboration of minds and hearts and artistry, all to create a magic that would transport and transform an audience onto a journeyed adventure of story.

It is a powerful tool…. to tell a story.

As with my passion for the performance arts, there was always deeply within me, a strong and irrefutable urge to support healing, a desire to help reunify what has been fragmented or damaged, to inspire back to the heart place, the pathway for healing, vision and wholeness. My awe of the miracles of nature and an innate desire to help heal led me to study and engage natural forms of healing, from nutrition and herbology to eventually finding my calling and inspiration in spiritual healing.

It was in my healing studies that I began to deepen an awareness of the challenging depths we navigate being human while also being a facet of the Divine, a part of everything that exists, a part of the circle of life. I began to see how healing is a map, a tool, a reminder and oftentimes a journey, to help return our awareness to our special place in this sacred circle.

For some 5 years, I studied at the Healing Light Center Church in southern California, where I became ordained as a Minister of Sacred Healing in the healing art of laying-on-of-hands. The founder, Rev. Rosalyn Bruyere, was and is, a masterful healer, a renowned minister, clairvoyant, clairaudient, a spirit channel and so much more. She is known nationally and internationally for her intuitive healing skills, her gift for teaching and her sincere and transformative work with faith, healing, medical and scientific communities.

I went on to open my own practice where I offered my unique mode of laying-on-hands spiritual healing services. This ancient healing art remains a continuum throughout the world today. At healing school, I learned not only from Rev. Bruyere, but from many masters of various forms of spiritual healing, from Indigenous traditional healers to religion based faith healers to those who offered their own unique forms of healing.

It was here that I began to understand what I had experienced since childhood, my particular ability to merge with the energy of others. As a natural healer I was an intuitive sensitive to energy and the many ways of communicating with that which flows as life force, chi, prana, Spirit. In healing sessions I would become a bridge between the physicality of one’s body and the larger, more expansive and knowing self, both communicating guidance to me that could assist in change for the person’s ailment.

As I continued in the ways of healing, I came to understand that “ailment” encompasses so much more than a physical malady, but involved a whole system of thought, of accumulated tensions & stresses, disappointments, confusion, fears and physical damage that become lingering residue, affecting our thoughts, our behaviors, our bodies and spirit.

Healing is the ability to receive the blessing of life. It is the integration of what we have been with what we can be, creating a link of opportunity though the heart of our desire.

Over the next 20 or so years, I continued to periodically offer healing services. Every healing taught me something more about our human lives, about the reality of perceptions and the infinite possibility for change. My healing skills overflowed into other aspects of my life too, as I found I had a keen knack for understanding systems and organization. So I helped clients to organize their homes, offices, studios, businesses and organizations. In connecting with them and the energy around them, I was able to bring insight to their intentions for creating spaces and methods that aligned with their dreams and desires to feel fulfilled, inspired, happy and functionally adept. I also worked with groups to bring healing, insight and empowerment where there was pain, confusion and disruption within their organizations.

I’ve come to understand that most things I’ve done out in the world, seemed to have been influenced by my ability to connect with an inner story, to bring an aliveness and visibility to the creative story that wants to be told, the story that awaits within our imagination, the one that lives in our bodies, pulls on our heartstrings and inspires us to move in the direction of healing, of receiving the blessing of life, the one that connects us more deeply to ourselves… and to each other. We are All In Spirit.

“Stories are not just meant to make us smile.
I think that our lives depend on them.” ~ Chinua Achebe

“She is indeed a powerful, eloquent and serene embodiment. Intense merges with grace. The divine is felt.”

“My students, by the way, continue to thank me for introducing them to you. This is noteworthy, as students haven’t acknowledged other guest speakers/facilitators. In other words, you made quite an impression. And more importantly, you made students think.”

“I was so moved by what you are doing – I have not stopped talking about it to MY white friends. I am hugely grateful for what you opened in my consciousness. Thank you Norma, for your gift to me, and to our sad tired world! Oh, and to our happy joyous world, too!!”

“We were BLOWN AWAY with your performances. You stood out from the rest of the group because of your professionalism and your ability to command the attention of the audience with the use of your voice and body movements. During intermission the ladies in the restroom were raving about you.”

It takes heart to trust
You are enough

ALL IN SPIRIT'S NEWSLETTER